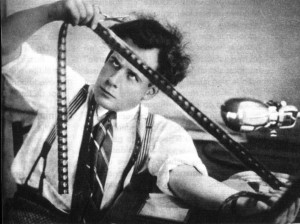 My first exposure to a real movie camera was when my friend, Terence got permission for us to use his father’s 8mm Bell & Howell. Terence owned a white bedouin costume that made him look like and Arabian Sheik. Taking our lead from Laugh-In, which used silent action clips of their cast out and about in “beautiful downtown Burbank”, shot in a Mack Sennett/Richard Lester style, our Sheik would sneak about Terence’s backyard or jump off the roof of the house, robes billowing in the air.

We took turns wearing the costume and using the camera, paying close attention to how we framed each shot, cutting in the camera as much as we could, but we were both aware that there was editing equipment that we could use. Having a limited budget, we were frugal shooters. We seldom shot more than one take of anything.

Our first splices were made with Kodak 8mm Presstape that worked like tiny band-aids covering multiple frames of film. We soon realized that we could see the tape when we projected our movies and graduated to making wet splices using a metal block and film cement. They were less noticeable, but we could still see them. Presstape was only good for joining the processed 50 foot reels together on a larger reel when you had no intention of editing it. Editing was where the magic happened.

I didn’t have an 8mm projector of my own, but I ordered a Prevue 8 sampler from Blackhawk Films. I probably saw an ad for the sampler in a copy of Famous Monsters of Filmland, a magazine that didn’t seem to follow any normal publishing schedule, but arrived on the newsstand at the whim of its editor, Forrest J. Ackerman, a punster who was as excited about the works of Ed Wood as he was about Fritz Lang’s Metropolis.

The Blackhawk Prevue 8 was a revelation.  Clips of Lon Chaney in The Hunchback of Notre Dame, Lillian Gish in Broken Blossoms, Charlie Chaplin in Easy Street, and the astonishing crane shot from Intolerance, could be projected on the wall and it was possible to own the entire films if you had enough money.

I could watch movies on the big screen or on television, but I found the idea of collecting and owning movies intriguing. Collecting would have to wait. First and foremost, what I wanted to do was make movies.  I may have lived on a drive-in theater with two 35mm carbon arc projectors and a work bench with everything you needed to splice 35mm film, but there wasn’t a 35mm camera or an unlimited supply of 35mm film stock. My film school would have to be the books by Sergei Eisenstein that I found in the school library and 8mm weekends at Terence’s house.